These amazing shots show a fight to the death between two lions and a hippo.
After attacking and driving the hippo into deep water, the pair of lions play a waiting game, lying still on nearby rocks for two hours before the hippo ventures out.
Having waited for it to get clear of its bolt-hole, the lions pounce and the plucky juvenile hippo puts up a fight, chasing them away. 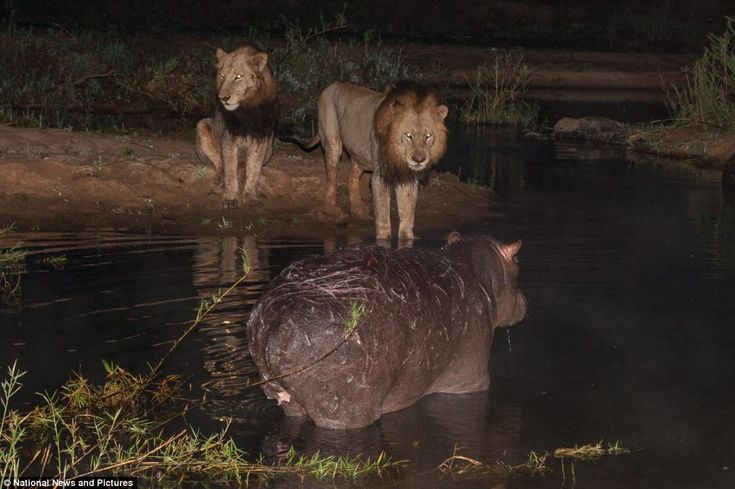 Law of the jungle: The two lions start off by stalking the hippo in its pond bolthole
One of the lions ventures into the water in the Sabi Sands Game reserve, but is chased out
‘From the scratches on the hippo I would guess that the lions had been going after the hippo for quite some time before I arrived.
‘This carried on for a while and then the lions went to lay down on a rock close to the water’s edge. About two hours passed and eventually the hippo slowly emerged from the water.
The hippo seemed not to see the lions crouched close by as they were very still and did not move. 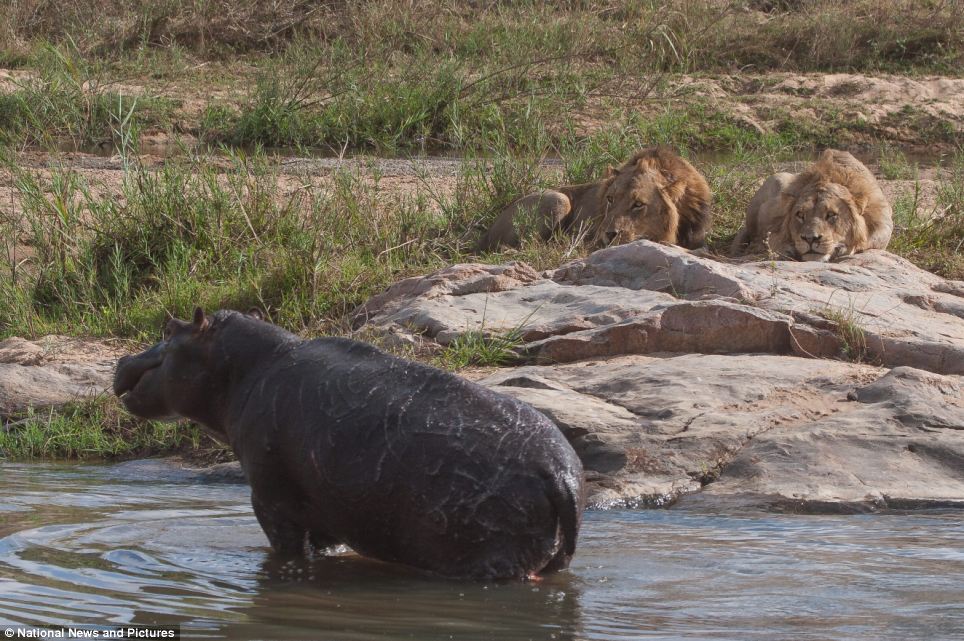 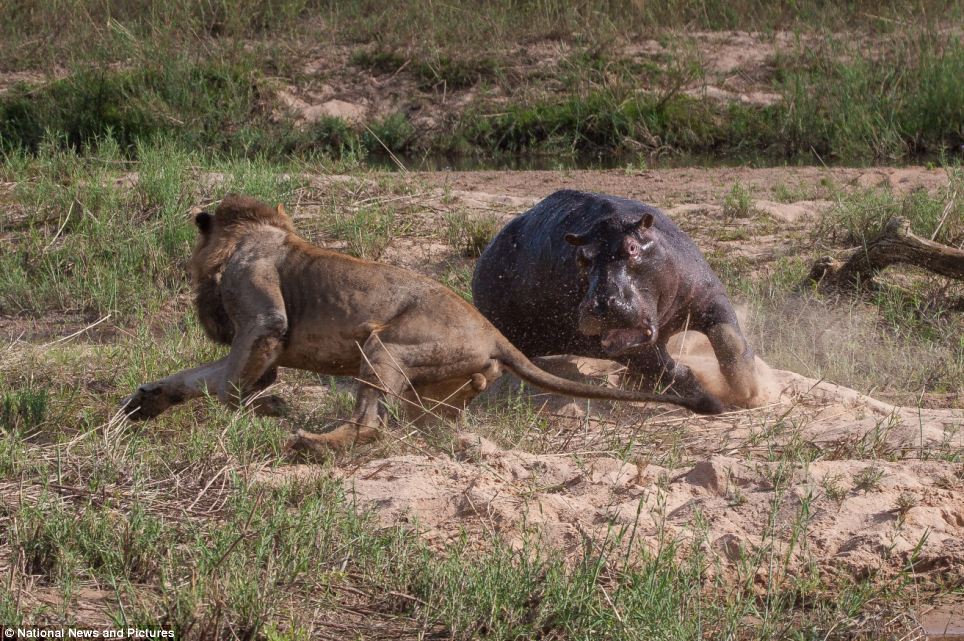 Forced out of his bolthole and onto dry land, the hippo is set upon by a vicious lion
A lion leaps onto the hippo’s back as the other one circles with intent. Blood can been seen on the target’s back
‘It looked around and all seemed clear, so he started walking away. The lions waited until he got about 50m from the pool of water before chasing after him.
‘The first lion was chased off by the hippo but the second lion jumped onto the hippo’s back which allowed the first lion to also grab hold of the hippo.
At this point the hippo realised he was in trouble and headed for the river with both lions attached. 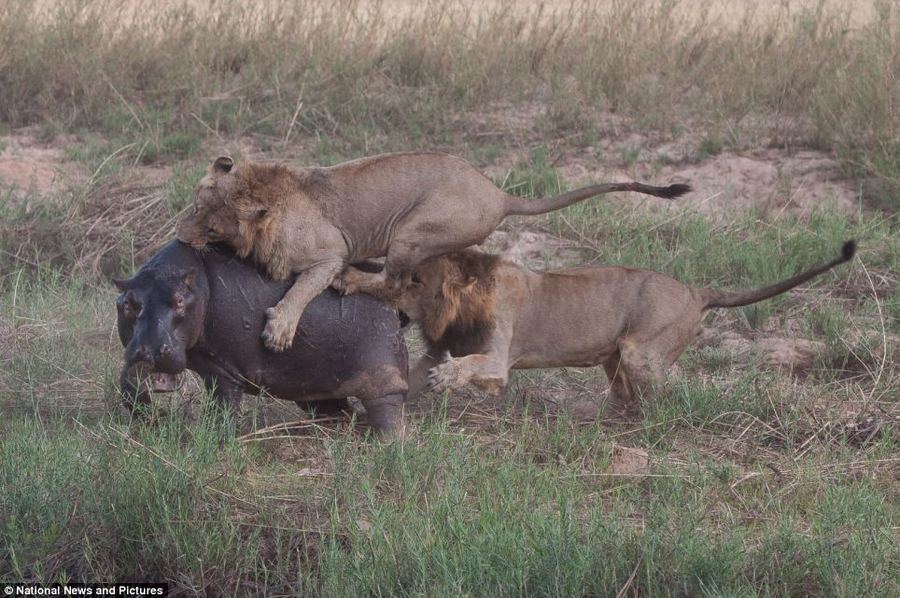 The hippo, still under attack, makes a dash back into the water in an attempt to escape 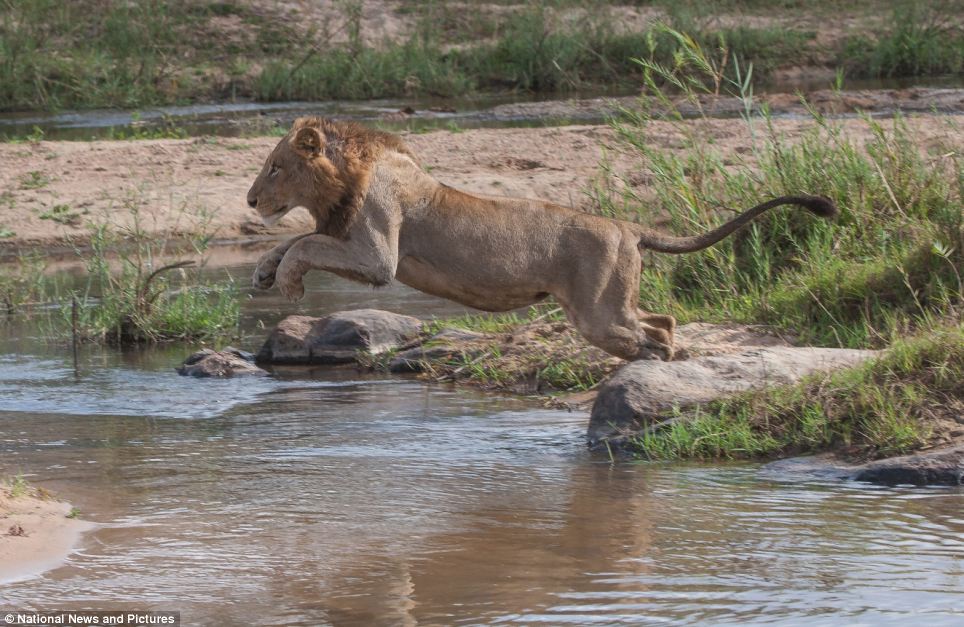 ‘It ran into the water and the lions held on but as the water was now shallower than the first pool and the lions were able to stand, they hung on and managed to pull the hippo onto its side.
‘They then flipped it over onto its back and held the hippo upside down in the water until it stopped moving, before they started to eat it.’
Mr Schoeman added: ‘I have never seen anything like this before. Lions are very opportunistic and will catch what they can whenever they can. 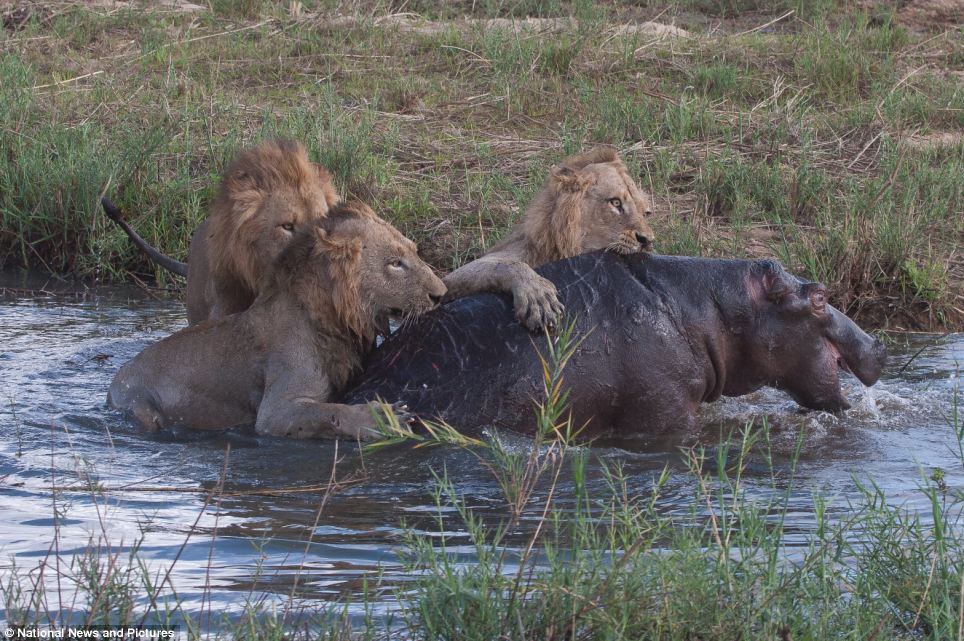 It’s three versus one now as the lions claws at the injured hippo in the pond. There is now no escape 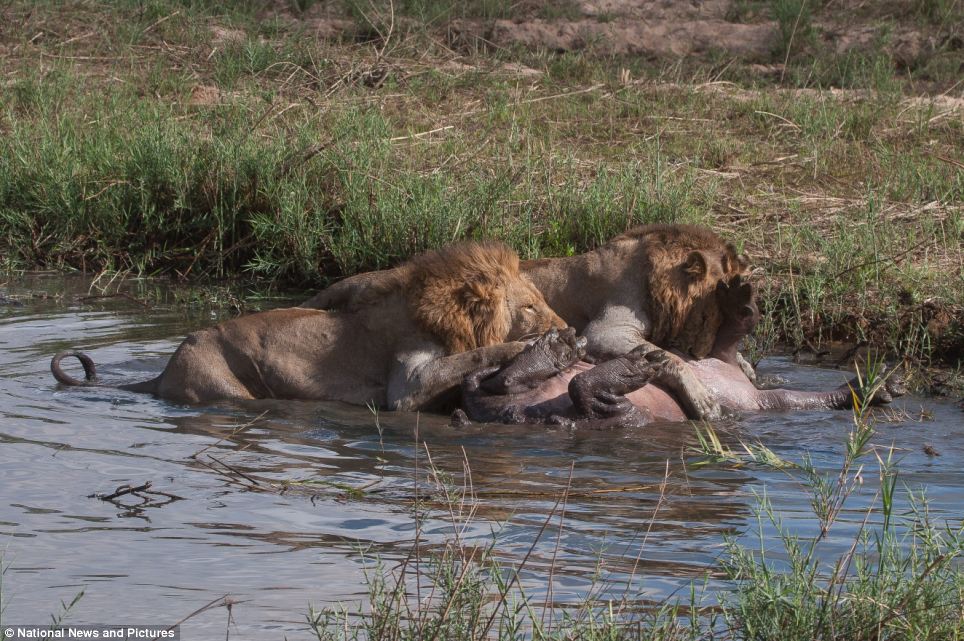 Game over: Lions 1, hippo 0 as the poor creature is devoured in the water. It did put up quite a fight though
‘I believe there are certain prides of lions that have learned to catch hippos but it is by no means a common occurrence.
‘To be able to witness something like this in all its rawness was an amazing experience. It shows the true power of our natural world as well as these magnificent lions.
Although it is not pleasant to see animals die and get killed it was a once in a lifetime experience.
‘As a photographer I was thrilled to get these images and happy that the exposures were good and all in focus.’
Mr Schoeman lives in Nelspruit South Africa, but has worked in lodges in South Africa, Tanzania and Botswana.
He was a full time guide for nine years before managing lodges in Tanzania and Botswana for three years.
During that time he was also a full time photographic guide and now hosts photographic groups to all the photographic hotspots across Africa including South Africa, Botswana, Namibia, Tanzania, Rwanda, Uganda and Zimbabwe.
Source: dailymail.co.uk