In this nail-biting moment, a leopard risks injury by climbing to an extreme height to catch a Tawny Eagle Chick. The eagle finally succumbs to the leopard’s grasp after putting up a fight. 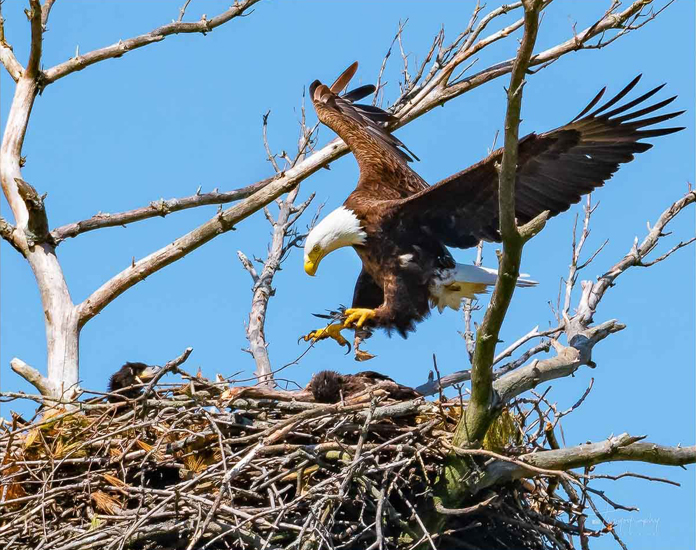 Wildlife enthusiast and virtual p.a. Ally Bradfield and her husband were lucky enough to witness this incredible sighting on the S41, near Satara. On our annual winter Kruger break, we were staying at Satara and took a morning drive down the S41.

Just before the Gudzani Dam, we noticed a car had stopped and was looking at a tree about 70m off the road. Slowing down to see what was going on, we saw a large shape moving in the nest at the top of the tree! We also saw a bird of prey dive-bombing the nest, so we grabbed the binoculars and couldn’t believe what we were seeing.
A leopard in the nest! Of course, I started recording the sighting. We were not sure what bird it was at the time – but after looking at the footage and asking around, discovered that it was a Tawny eagle chick. They leave the nest around mid-end August. In 20+ years of visiting the KNP every year, I have never witnessed anything like this before.

I feel so lucky and privileged to have experienced it, and proud that I managed to capture the moment. The grass was too long for us to monitor the leopard after it had left the tree, but I was guessing he would be eating his well-deserved catch for a while. My advice would be to just enjoy and appreciate it.
If you have a camera, keep calm, have binoculars and a camera or even a video camera on the ready.